On either the 8th or 15th August Boulevard Films will be shooting a short film in Wingello called "Markers".  More details are on their Kickstarter page, and it looks to be a very interesting and fun project.  For a couple of days the crew will be in Wingello filming in the hall and the shop and surrounding area.
The director, Rhett Wade-Ferrel, was looking for a country town that reminded him of his home town and Wingello had a great small village feel that suited his story.
This is how the director describes the film:


Markers is a short sliver of emotional drama set in an isolated country town in rural NSW called Wingello. The town is so small in fact that there is only one shop, which also acts as the local post office, supply store, coffee shop, gas station and VHS lending library.
Markers is based on a true story that explores the themes of loss, human impermanence, and sentimentality through a modest funeral held in honour of one of the town locals Ron Millington. The story focuses on the singular journey of Ron's fifteen-year-old son Joel as he attempts to arrange a special farewell at the funeral service whereby mourners are asked to step forward and write on his fathers coffin with permanent markers.
The title Markers, aside from its obvious literal meaning, is a cue to the existential theme of human impermanence and our need to leave something behind that can be remembered. It also relates to the idea that traumatic events often leave permanent emotional marks on us. As we all know, death is a dual rite of passage, both for the deceased into the afterlife and those left behind into a new life without them and this becomes the emotional subject matter of the film.
The film is a reflection of my experience of losing my dad with the hope that it can communicate these universal ideas in a way that is heartfelt and sincere. Above all the film hopes to articulate the surreal experience of what it feels like when we lose someone.
Rather than being crammed with melodrama and tear jerker moments, Markers will take a more genuine path to become a carefully crafted cinematic reflection of real life that feels down to earth and poetic.
Here are some photographs I shot in the country town we found to set the film in that are a great reference to the surreal tone of Markers. And yes there is only one shop and it's freezing.
Rhett Wade-Ferrell, Director


The final scene in the film takes place in the hall at a funeral service of a well known local man and requires a number of people to be extras.  If you wish to spend a day being part of a film (Friday 8 August OR Friday 15 August depending on timing of essential cast and crew), why not give it a go?
No money is involved, but lunch will be provided and you will get a copy of the short film when it is completed and you will be part of something unique and fun in Wingello.


What Extras are required?

FUNERAL ATTENDEES IN HALL
The film requires approximately 20 background extras to sit in a ‘funeral service’.
Absolutely everyone is welcome. All ages, ethnicity, families, couples will help make the scene authentic.
The role will require you to react to the funeral scene as if it were someone you knew from Wingello who had passed away. It could be a close friend or someone you knew from town. You will also be required to sing a hymn as part of the service along with the rest of the group.
On the day you will be required to come to the shoot in your normal Saturday casual clothes and bring along 2 options of what you might wear to a funeral – 1 option will be a casual option and the other a little more formal.
HYMN SINGER (FEMALE / MALE)
There is one role in the funeral scene that features a character.
We are looking for a man or woman, approximately in her 50s – 60’s, to lead the hymn Abide With Me as part of the funeral service.
It is not about being the best singer in the world and it is preferred that you hit a couple of bad notes. The singing of the hymn will be accompanied by the piano.
Your wardrobe should be what you would wear to a funeral in Wingello of someone you knew. One casual option and one more formal option would be great.
PIANO PLAYER (FEMALE / MALE)
We will require a pianist to play a very basic version of the hymn Abide With Me. This character will be required more for their musical skill than their acting ability.


You will only be seen in the background and should consider the wardrobe notes above. 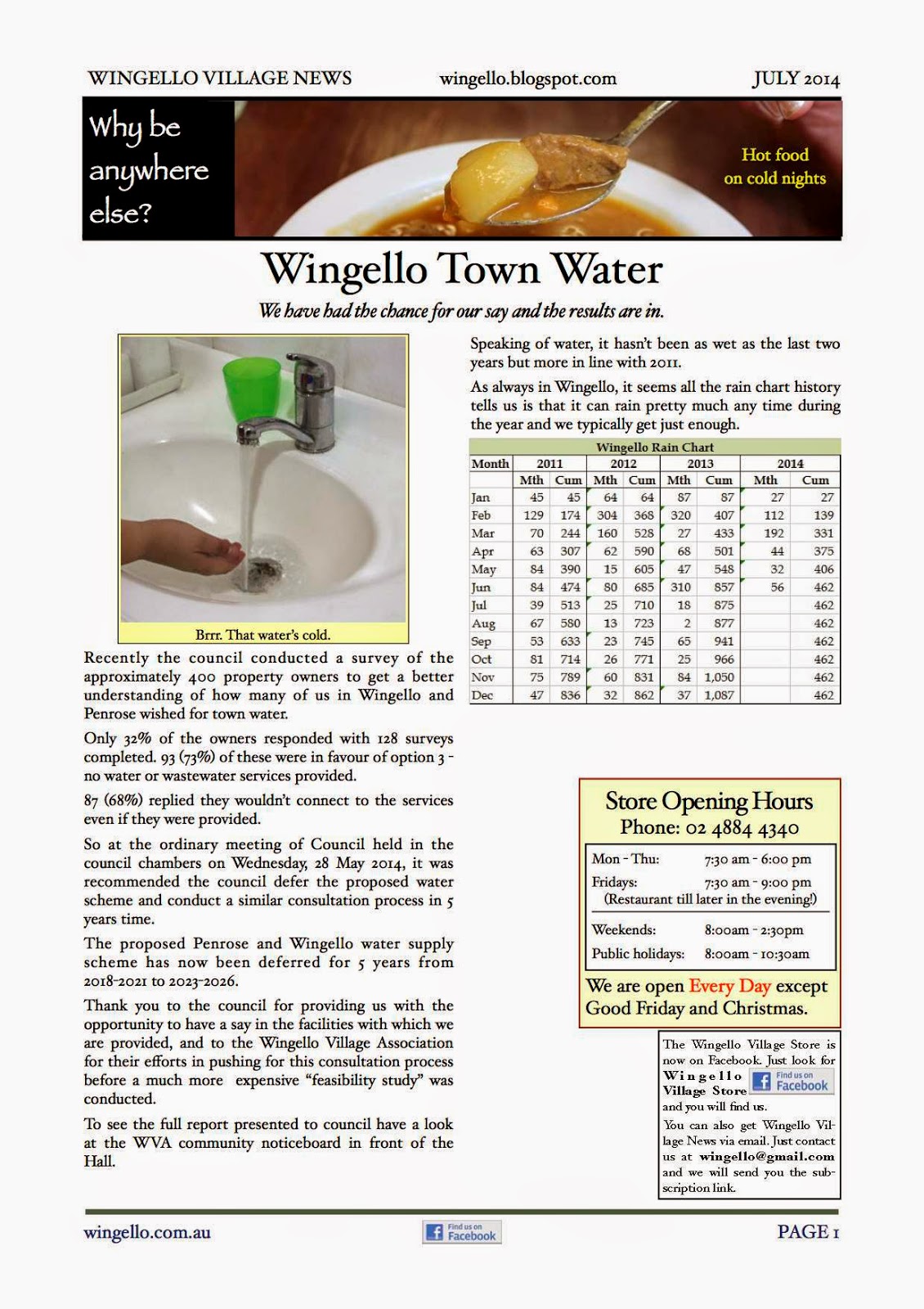 Wingello Village News for July 2014 is out.